How Hewlett-Packard layoffs were avoided by founders Bill and Dave 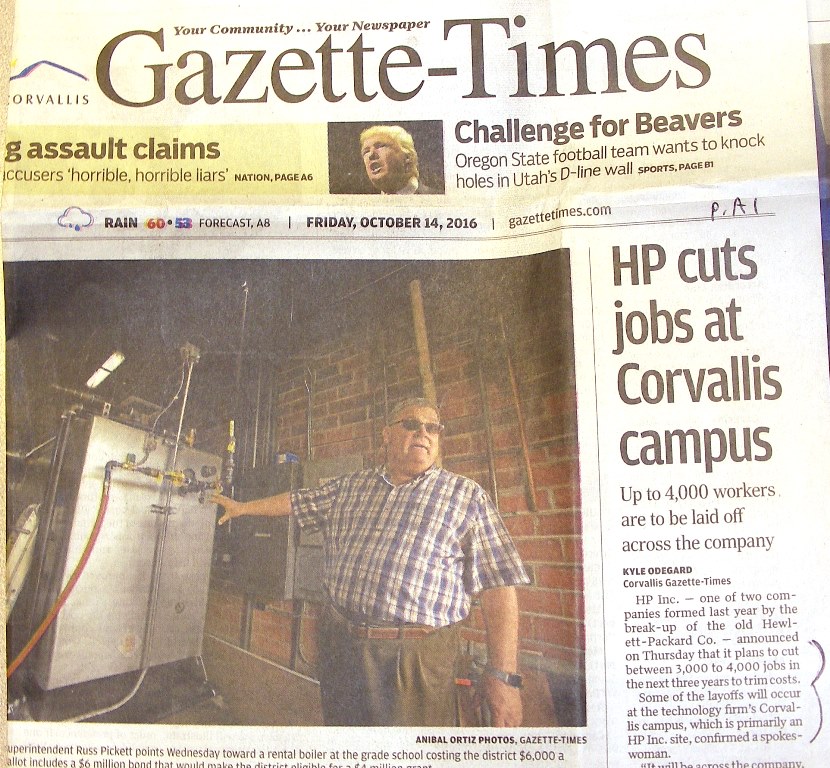 PHOTO: The Corvallis, Oregon morning newspaper headlines announced the latest layoffs by Hewlett-Packard as being the result of a structural decline in business and the last year split off of the computer printer and PC business from the Hewlett-Packard Enterprise that runs a computing services business. Both of these parts of HP had been previously split off from the medical, analytical and electronic instrument test and measurement businesses that were later split into Agilent Technologies and Keysite Technologies, which included the electronic test and instrument businesses run by HP since it was founded in 1939. (See newspaper story by Kyle Odegard, "HP cuts jobs at Corvallis Campus. Up to 4,000 workers are to be laid off across the company," Gazette-Times, Fri. Oct. 14, 2016, p. A1, A3 gazettetimes.com posted online as "HP announces job cuts" that follows up on the previous story by Nathan Bruttell, "HP to jettison up to 30,000 jobs as part of spinoff," gazettetimes.com posted Sep. 15, 2015) 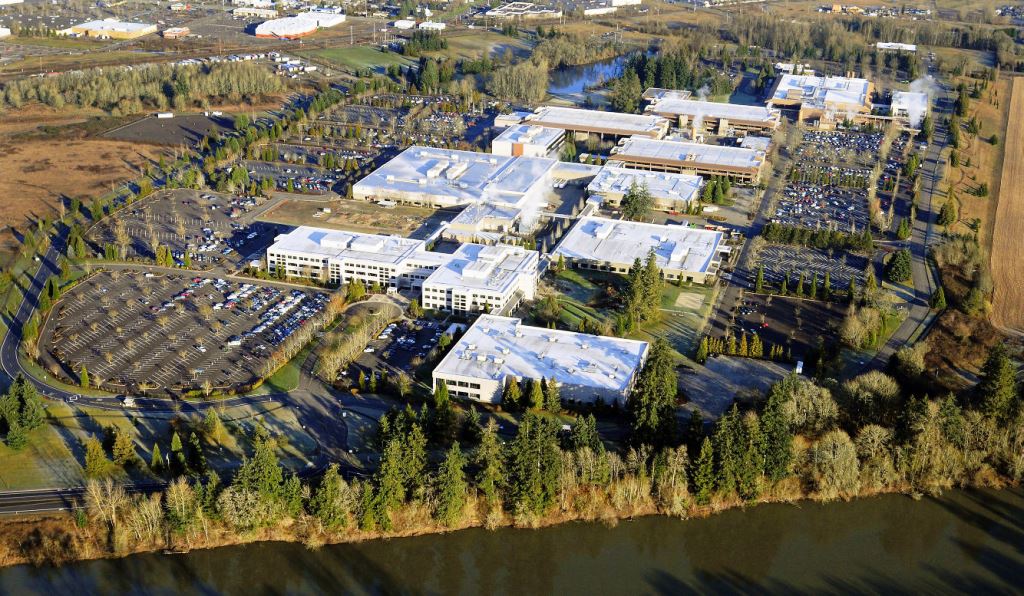 PHOTO: An aerial view of Hewlett-Packard's Corvallis, Oregon campus circa 2010, which is located near Oregon State University and next to the Willamette River. The first building was built in 1975 at the center of the site and named "Building Number 4." It addressed the business needs of the rapidly expanding handheld scientific calculator division whose first product was the famous HP-35 handheld calculator first introduced in 1972. At the Corvallis site, HP invented some of the first personal desktop and portable computers, which led to the construction of HP buildings numbers 3 and 5 being built adjacent to Building 4. HP also built the world's first handheld computer smart phone in 1982 based on Bell Labs then new cell phone technology, but the project was cancelled by HP management and Steve Jobs of Apple picked it up after being shown it. Over the next twenty years, the big growth of the site occurred after the invention of the inkjet printer for both calculators and personal computers that led to more buildings being built to house the nearly 10,000 employees who were working on the HP Corvallis site by the 1990's.

PHOTO: Hewlett-Packard's plans in the 1970 to build a calculator plant and research facility in Corvallis is reported in a newspaper article by John Atkins, "H-P executive predicts 700 new jobs," Gazette-Times Aug. 8, 1974, p. 2. (See previous posts HP and Corvallis newspaper history (3/11/09) about the move of the Hewlett-Packard calculator division from Palo Alto, California to Corvallis, Oregon in 1975 and Don't Cali-fornicate Oregon and HP annexation history (6/14/12).

What I've not said much about is how the Hewlett-Packard company founders William Hewlett and David Packard avoided laying off employees from the start of the company's founding in 1939 until their deaths around the turn of the 21st Century. They were both humble men who had survived the Great Depression in the 1930's and therefore did everything in their power to manage HP in a very conservative manner that would not require HP to be a hire and fire operation in order to remain profitable and in business if another Depression occurred. They also did not want to follow the stuffy and formal business practices common in Back East companies at the time, for example, both men insisted on employees dressing casually and calling them by their first names Bill and Dave instead of by the more formal conventions of addressing them as "Mister," while dressed in a business suit.

To avoid layoffs, Bill and Dave adopted a very conservative business strategy that was paradoxically based on innovation and invention, which historically had led many businesses to high risk, boom and bust ventures. To avoid layoffs, in addition to their excellent judgement in deciding what products to invest in versus not, they believed in having a diversified portfolio of businesses and products that were each managed by a dedicated team that could fail or succeed without bankrupting the company. This strategy allowed for the risk taking that often led to spectacular successes, while at the same allowing Bill and Dave to easily judge the financial results within thier larger business.

The advantage of Bill and Dave's decentralized division management business model was it allowed the company to grow by promoting the best people within the company without requiring Bill and Dave to micromanage every business for overall HP success. This business model worked great in the types of businesses HP was initially involved in, such as electronic test and measurement instruments and handheld scientific calculators, but it proved to have a problem in businesses that required a system of products from multiple divisions and other companies, such as computer systems, which need mutally exclusive business models to be competitive u the real world.

By the 1980's Bill and Dave had recognized the system management issue and reorganized their managers in a matrix with responsibilities to both their "box product business" as well as to the success of HP's system businesses. Of course, this was easier said than done because it required managers to fly all over the world to coordinate their activity with other businesses as well as HP's customers.

Despite the difficulty of managing the rapid growth and diverse businesses of HP, Bill and Dave kept the HP growing growing until they died. But after they died, Wall Street investment bankers started to impose their view of how companies should be organized and divided it up into smaller pieces that were easier to manage and easier for Wall Street to understand and judge the success or failure of the business finacially.

Of course, Wall Street investment bankers make good money by splitting up companies, but they did have a good point about the drastically different business models that were required to make HP successful and the fact that these business models were often in conflict to the detriment of all. For example, the traditional electronic instrument business could grow at ten or twenty percent per year while investing about ten percent of revenues in R & D to continuously upgrade and invent new products for their customers. In contrast, other businesses could be profitable only with a larger investment in R & D, such as software businesses that often need to spend more than 20 percent of revenues for R & D in order to remain competitive.

Another example was the business versus consumer businesses, such as HP printers, where a home user doesn't have the same expectations of reliability and speed that a business might have and be willing to pay for. Consumer printing products, such as inkjet printers successfully profit from a business model that is called by business schools a "razor vs. razor blade" strategy of virtually giving away the razor or printer product in order to gain market share, with the expectation that your profits will come from the annuity payment comprised of repeat sales for supplies, such razor blades or inkjet pens and paper supplies.

Of course, the problem created by needing to use multiple business strategies is figuring out how it can be explained to public investors, including inpatient Wall Street stock portfolio managers who can't figure out how to value your business in the public stock market.

Of course, as long as the company founders Bill and Dave were the major stockholders, it didn't matter because they understood it and as long as they grew revenue and profits, Wall Street didn't care about the details. However, shortly after their deaths, HP was pressured into a four way split of their business, along with a few acquisitions and mergers driven by Wall Street investment bankers. (HP first split into HP and Agilent Technologies, then HP split into HP Inc. and HP Enterprise plus Agilent split off Keysite Technologies, which was the original test and measurement box business of HP. Sadly, while HP is still a big company, this has led to it becoming a hire and fire operation like most companies in America.

Thomas Kraemer
As I've gone blind over the last few years, I have been doing ethnographic research concerning people with a minority sexual orientation or gender identity.